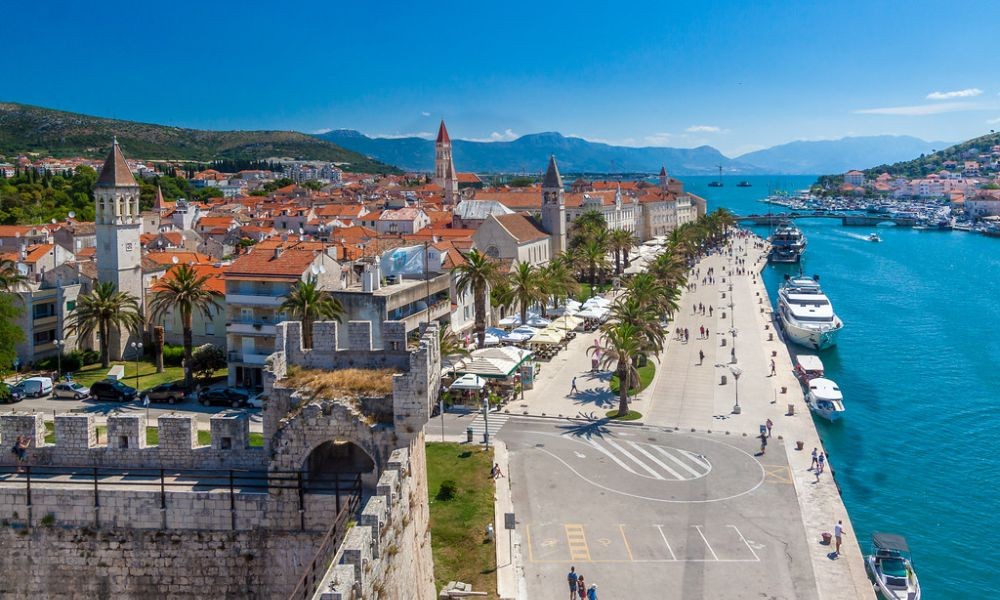 Spending a vacation in Dalmatia is the dream, but how to choose between all the different gorgeous places? We come to your aid by showing you the town of Trogir and all its wonders.

Every year before the summer season the same question arises: Which holiday destination to choose next for your relaxing holiday in Croatia? The coast of Croatia offers Mediterranean beauty from Istria to south Dalmatia. One real treasure of the Adriatic Sea is the charming town of Trogir. Find our everything you need to know about Trogir in the following blog and become convinced why Trogir is the ideal holiday destination for you! 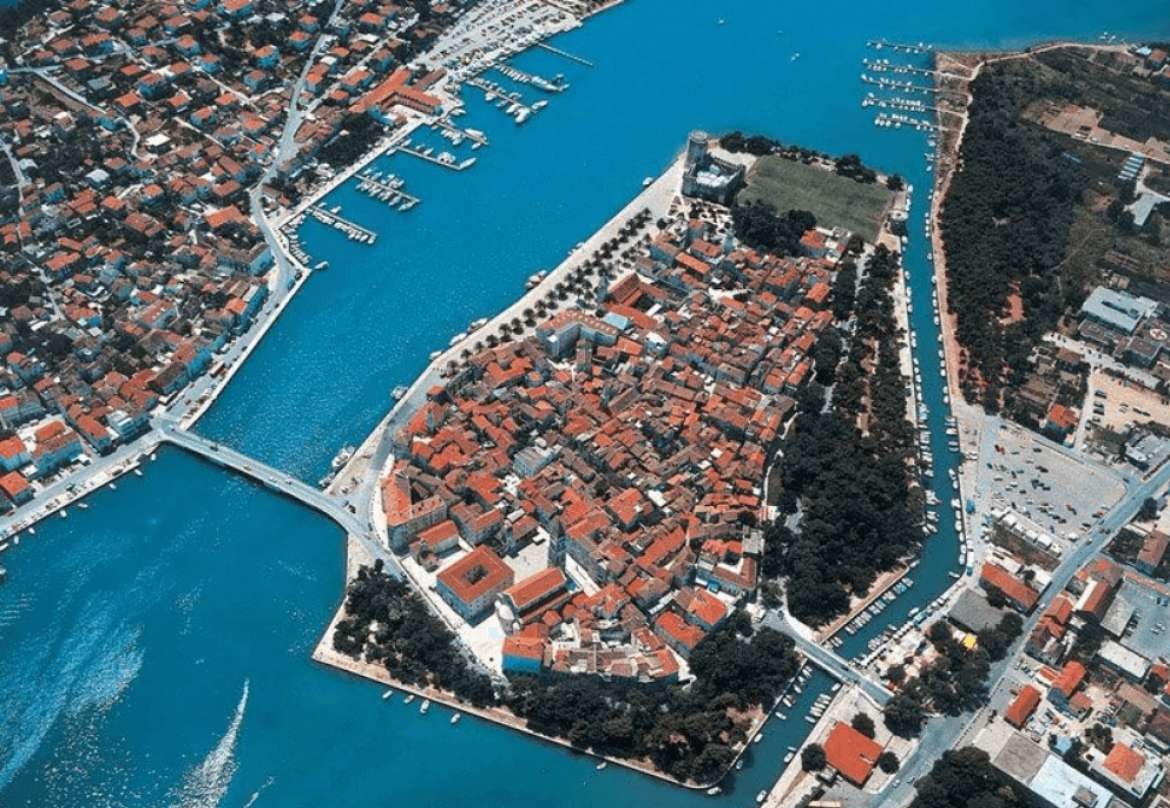 Trogir is a delightful little town located in the heart of Dalmatia on the Adriatic coast of Croatia. The convenient location, 25 km away from the city of Split, makes Trogir to a popular holiday and excursion destination. Additionally, Trogir is very close to the Split Airport, making the journey to Trogir extremely convenient. Located at the waterfront of the Adriatic Sea, Trogir Old Town situated itself on an island, which is connected to the mainland by a bridge. Behind this part of Trogir is the island of Ciovo, also connected to the Trogir Old Town via a bridge.

Trogir is best known for its well-preserved sacral buildings which reflect the architectural style of the Romanesque, Renaissance, Gothic and Baroque periods. The entire Old Town of Trogir is a UNESCO World Heritage Site for its cultural significance not only for Croatia, but also for Europe. As soon as you enter Trogir Old Town from the old bridge built by the Romans, you are transported back into the past. Experience the history of Croatia in a new way and get acquainted with the typical Croatian and Dalmatian way of life in this charming coastal city. 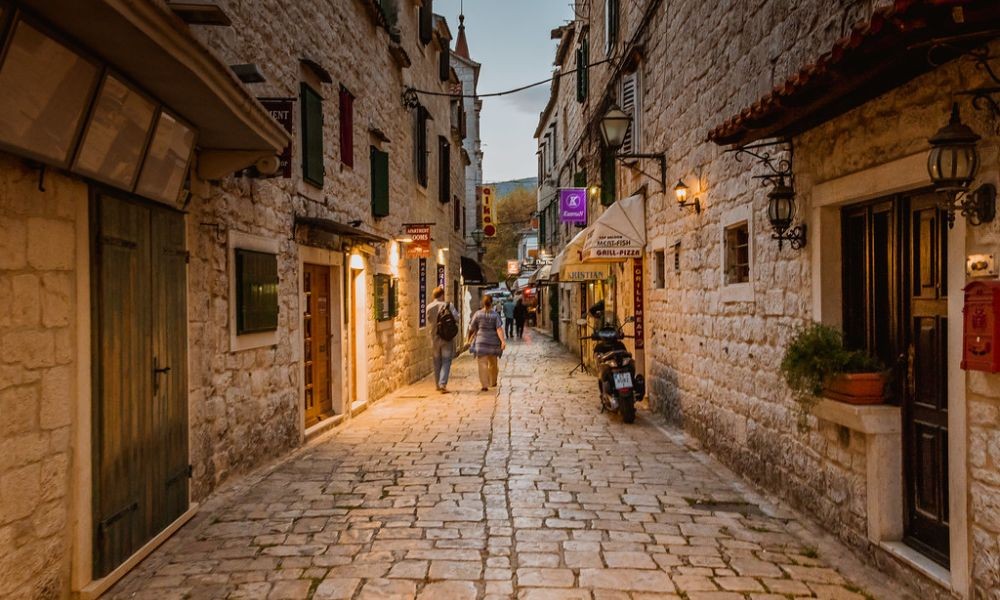 Due to the beautiful well-preserved architecture of times long gone, you can vividly imagine how Trogir looked like throughout the years. Its history starts with the ancient Greeks, who founded the settlement Tragurion in the 2nd century BC, hence the name Trogir. Once a peninsula, the Romans separated it from the mainland, creating the present-day look of the Old Town as an island whose port was of great importance to the Romans. Later the Venetians protected Trogir with fortresses from the attacks of the Turks. After numerous attacks, occupations and reconstructions, Trogir was declared a UNESCO World Heritage Site in 1997.

The Cathedral of St. Lawrence & Its Unique Bell Tower

The symbol of Trogir is undoubtedly the Cathedral of St. Lawrence, which is located on the John Paul II Square in the Old Town. The construction of the cathedral began in the 13th century. It is best known for its richly decorated portal, which depicts elements from the Bible and the 12 months of the year. The different architectural styles of the epoch can be best seen on the 47 m high bell tower of the cathedral. From the bell tower you can enjoy an unobstructed view of Trogir and the coast of Croatia. 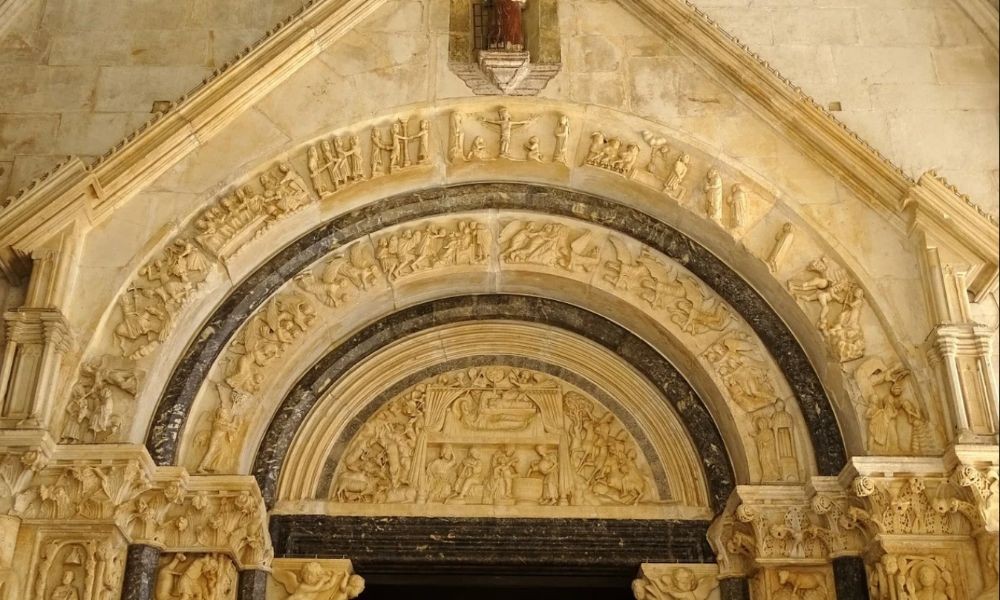 I have already mentioned the Square of John Paul II as the place where the Cathedral of St. Lawrence is located at. However, the square deserves more attention since it is home to a number of important buildings such as the Old Town Hall, which will take you back to the 15th century, the City Loggia, which served as court once upon a time, and the Cipiko Palace, which consists of several buildings and features elements of the Venetian Gothic period. 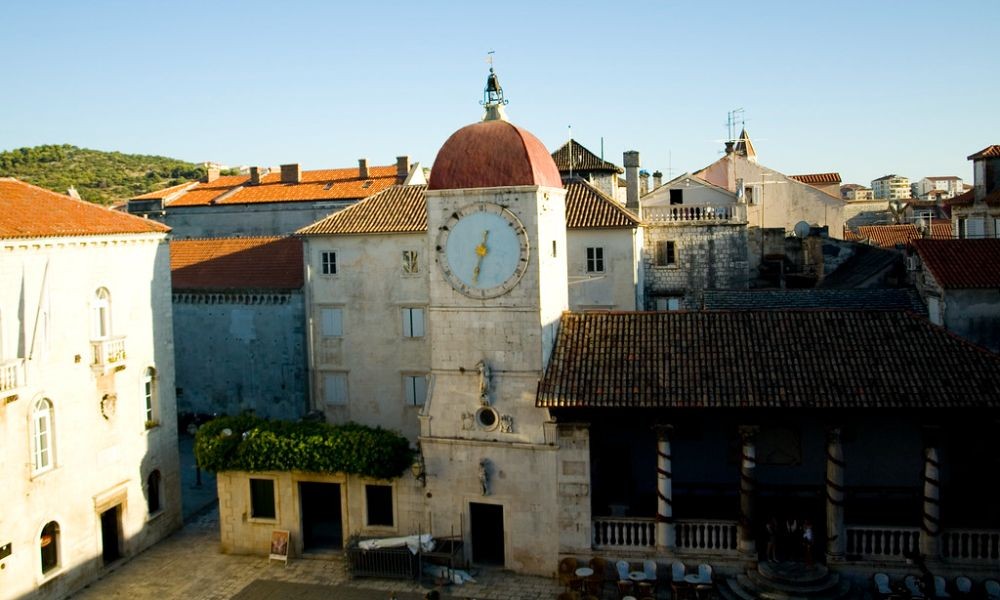 The Imposing Kamerlengo Fortress on the Trogir Promenade

The Kamerlengo fortress is located directly on Trogir´s promenade and will catch your eye on a walk through Old Town Trogir. The fortress was built in the 15th century during the Venetian occupation and was used to protect against the Turks. Today, the Kamerlengo fortress serves as a venue especially in the summer months and is a popular place to enjoy the sunset in Trogir. Furthermore, from the fortress you can enjoy a wonderful view of Trogir and the coast of Croatia at any time of the day. The experience is especially enchanting once night falls as the fortress becomes beautifully illuminated. 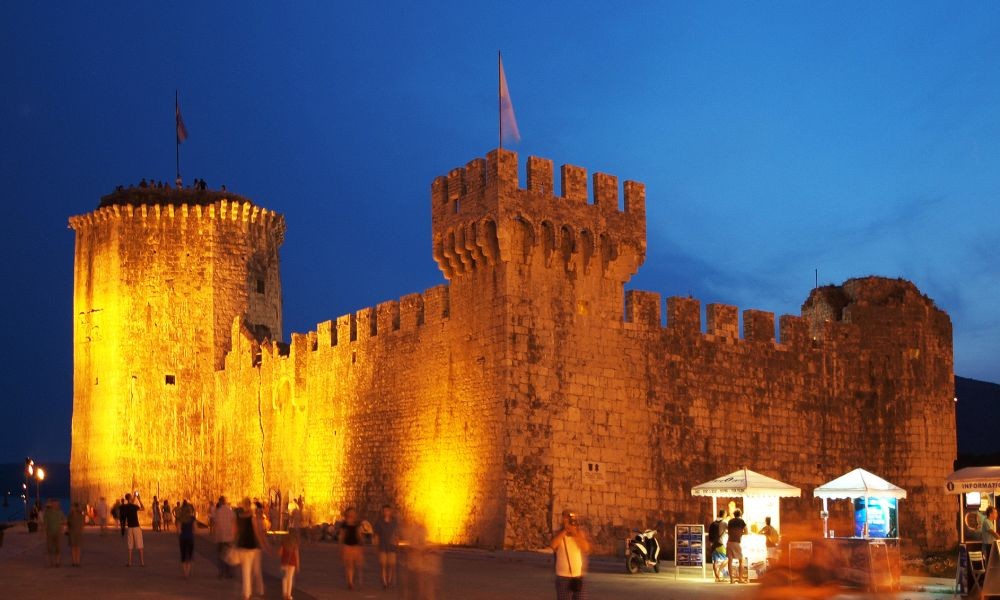 The Surroundings of Trogir – True Soul of Dalmatia

You will surely get the itch to explore the surrounding area of Trogir while on your vacation in Croatia. And how would you not when the island of Ciovo is right behind you, making the island one of the most easily accessible islands in Croatia. However, the surrounding area offers plenty of places with gorgeous nature which are just waiting to be discovered. The area around Trogir is hard to beat, especially when it comes to viewpoints.

Get Amazed on the Island of Ciovo: Hermit Church of Our Lady of Prizidnica

I have mentioned the island of Ciovo quite a few times till now in reference to Trogir. However, I have not said a word about the island itself. So let´s change that. The small town of Slatine on the island hides the gorgeous Hermit Church of Our Lady of Prizidnica. The church is located in the south of the island directly on a rock and was built in the 16th century in honor of the Immaculate Conception of the Virgin Mary. Its location directly above the sea creates an incomparable and endless panorama of the Adriatic Sea in Croatia. A really worthwhile destination for a quick trip! 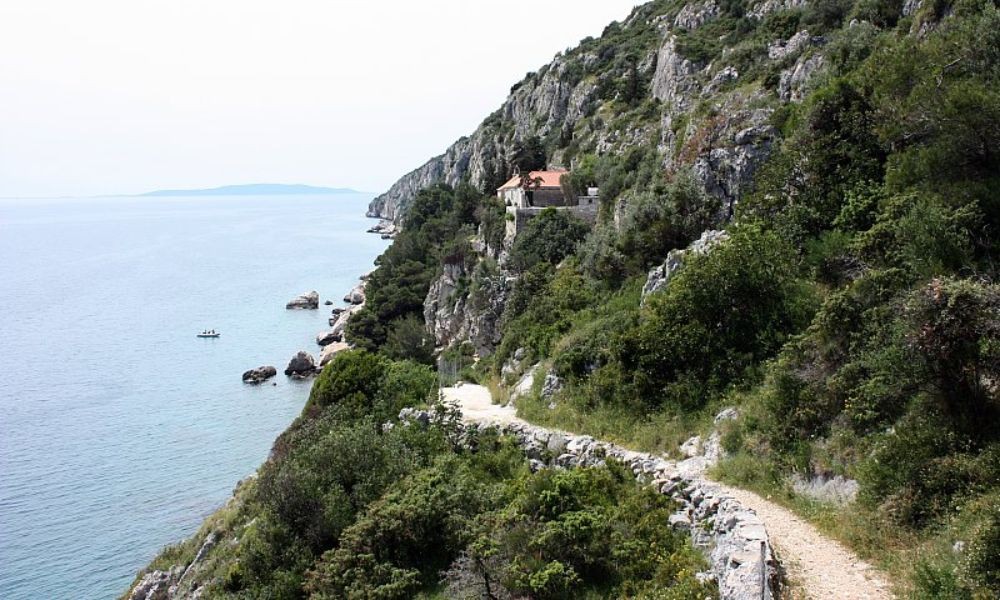 The Idyllic Chapel of Our Lady of the Snow in Marina

Let’s explore together the mainland of Croatia for a bit. Our way leads us to the small village of Marina which is a few kilometers north of Trogir. The delightful little Chapel of Our Lady of the Snow is located on the hill of Drid in this charming little village. Every year on August 5th, there is a festival in honor of Our Lady, who on that day announced the falling of snow and asked for the chapel to be built, hence the name of the chapel and the annual festival. An incredible view of the Croatian coast, the island landscape and the nearby towns can be seen in front of the chapel. 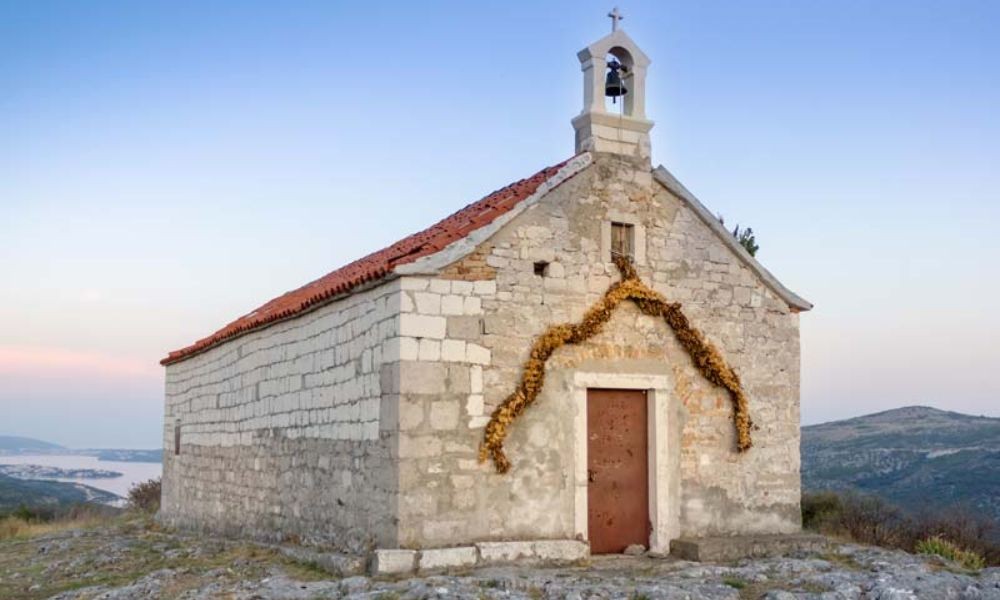 The city of Split with its picturesque promenade and Diocletian´s Palace is a destination that has to be visited when on vacation in Trogir. In summer months, driving from Trogir to Split can be long and nerve-wracking as the roads became busy and traffic jams are more of a rule than an exception. So why not just take a boat to Split? There is a daily ferry line for pedestrians from Trogir to Split via Slatine on the island of Ciovo and back again. The tickets are extremely affordable and you can get to know the Adriatic Sea up close. The trip doesn´t take long and the boasting experience is definitely worth it. 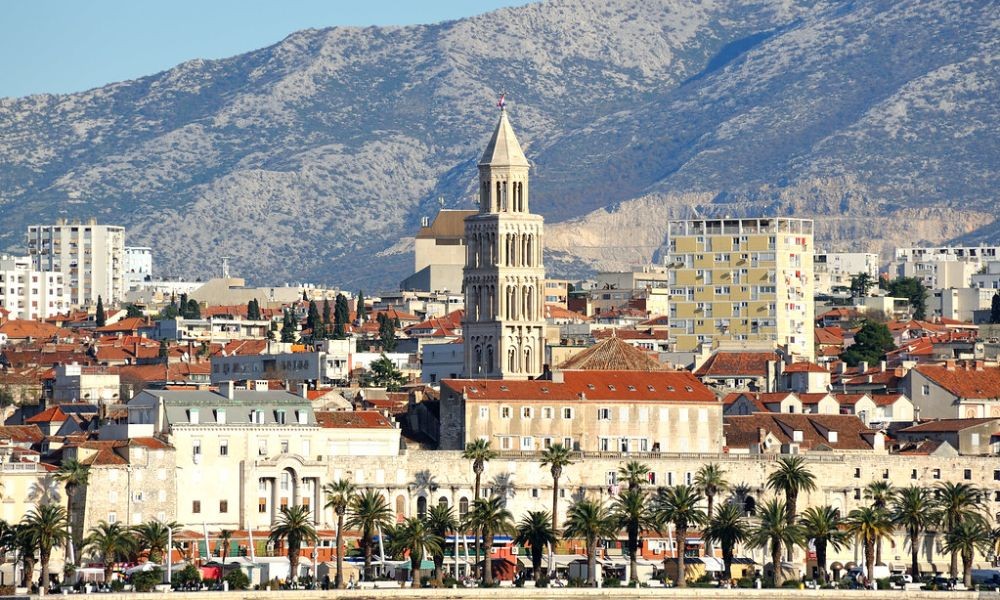 If you are more of a nature person, then you should definitely visit the Pantan Nature Reserve not far away from Trogir. This is a swamp area with a lake, which is the source of the small river Rika. The marshland is home to numerous endangered animal species. The vegetation in this area is also a sight to behold. Therefore, a walk through the Pantan Nature Reserve will give you a detailed insight into the flora and fauna of Croatia. 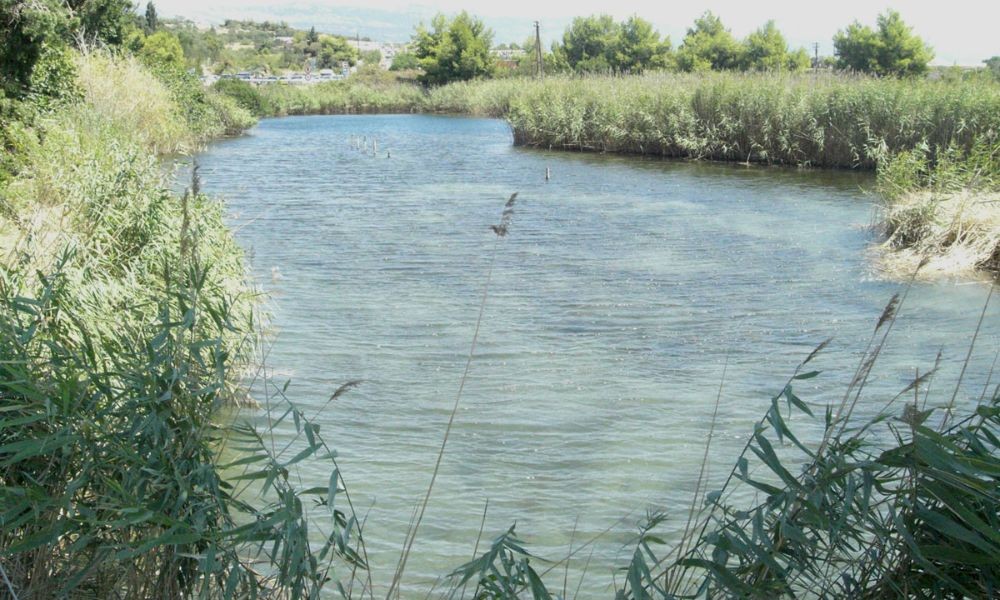 Pure Relaxation on the Beaches in & around Trogir

What is the number one reason for spending your summer vacation on the Adriatic Sea in Croatia? The beach and the turquoise sea of course! Spend your holiday in Croatia with your loved ones on one of the beautiful Dalmatian beaches which are not lacking in the Trogir region.

About 3 km from Trogir is the Medena beach, which is part of the Medena Hotel complex. This is a beautiful pebble beach with concrete slabs as sunbathing areas. The adjective lively is the best way to describe the Medena beach in the small town of Seget Donji, as it offers a bunch of fun activities to young and old holidaymakers alike while the cafés and bars keep the atmosphere relaxed. Medena beach is, therefore, suitable for the whole family and guarantees that everyone finds what they are look for, whether it is an adventure or full relaxation.

We have already explored the nature of the island of Ciovo and now it's time for one of the most beautiful beaches on the island to be introduced, namely the beach Labadusa near the village of Okrug Gornji. The beach has enough parking spaces, so you can travel by car without hesitation. On the beach you will find a pebbly area surrounded by trees that provide natural shade. Leisure activities in the water, as well as a wide range of gastronomic options, are available on Labadusa beach, so it is worth taking a short trip to the beach and relax on the island of Ciovo. 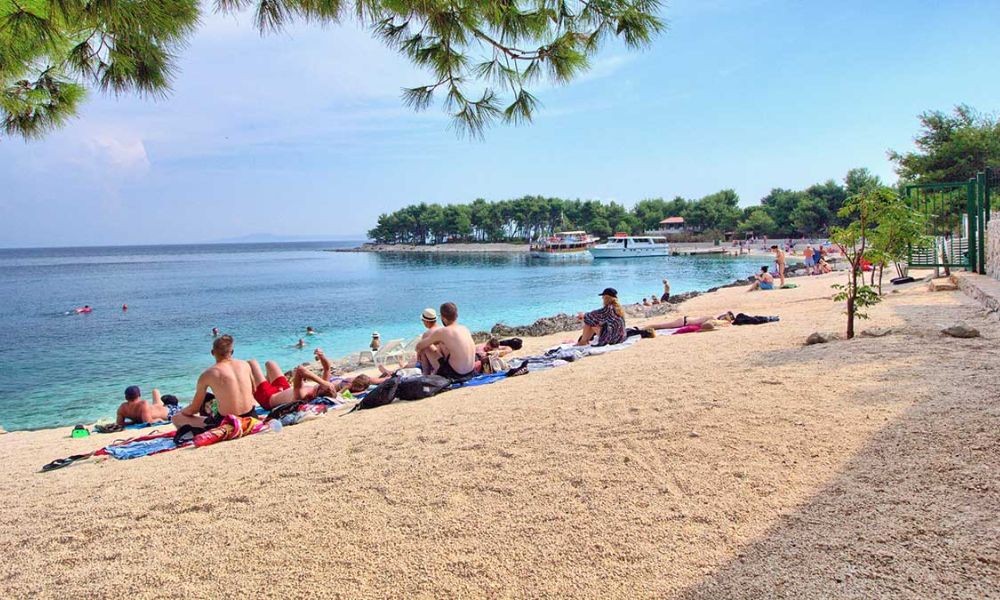 The Dreamy Beach Pantan on the Edge of the Nature Reserve

You already know the Pantan reserve and now we would like to introduce you to the associated Pantan beach, which is located on the edge of the reserve directly at the confluence of the Rika river into the Adriatic Sea of ​​Croatia. This beach is made up of fine gravel, where the fresh water of the river meets the blue Adriatic Sea. You can get to the beach on foot or by bus 37, but due to some parking spaces, you can also travel by car. So, make yourself comfortable on Pantan Beach and enjoy the Adriatic Sea in Trogir in a new way.

Fantastic Holiday Homes with Pool in Trogir and the Surrounding Area

The only thing that is missing from your dream vacation in Trogir on the Croatian coast is a gorgeous accommodation and of course we have something for you in this regard as well. In Trogir and the surrounding area you will find some of our wonderful holiday homes with a private pool, which give your holiday in Croatia that special something, such as the Villa BiancoMar in Trogir. This villa is suitable for 11 people and, in addition to its wonderful heated pool, also offers a view of the sea. The villa impresses with its futuristic and minimalist design with an open room concept and the dreamy roof terrace invites you to a glass of wine after an eventful day in Croatia. If you are interested in our other villas in Trogir and the surrounding area, then click here!

We have now reached the end of our blog about the diverse city of Trogir and you have learned a lot about the sights, history and the surrounding area. We hope that you like Trogir as much as we do. If you are still looking for a wonderful holiday home with a pool on the Adriatic Sea for your next vacation in Croatia, then take a look at our wide range of luxurious holiday homes with a pool in Croatia. From modern to rustic, directly by the sea or in the midst of green nature, you will find the most beautiful villas from Istria to Dalmatia for every taste at Adriatic Luxury Villas!

The Adriatic Luxury Villas team is always at your disposal if you have any further questions or need additional information, so please do not hesitate to contact us.

Thank you for reading & have a great vacation in Croatia! 😊